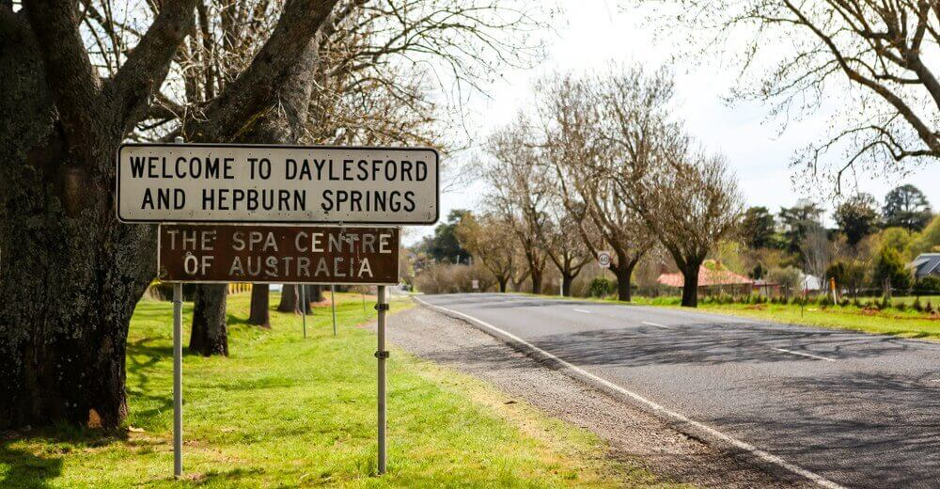 Daylesford is a spa town located in the foothills of the Great Dividing Range, within the Shire of Hepburn. First established in 1852 as a gold-mining town, today Daylesford has a population of 2,548.

As one of Australia’s few spa towns, Daylesford is a notable tourist destination.
The town’s numerous spas, restaurants and galleries are popular alongside the
many gardens.

The broader area around the town, including Hepburn Springs to the north, is known for its natural spring mineral spas and is the location of over 80 per cent of Australia’s effervescent mineral water reserve.

With 65 mineral springs, the Daylesford-Hepburn Springs region accounts for more than 80 per cent of Australia’s known mineral water springs. The town is also known for hosting a number of annual events, including the ChillOut Festival held during the Victorian Labour Day long weekend in March, the largest gay and lesbian festival in rural and regional Australia; the Harvest Week Festival; the Lavandula Festival; and the Hepburn Springs Swiss Italian Festival celebrating the town’s Swiss-Italian heritage.

Prior to European settlement the area is thought to have been occupied by the
Djadja Wurrung people. Pastoralists occupied the Jim Crow and Upper Loddon districts following white settlement in 1838. In 1848, Irish immigrant John Egan took
up land on the future town site then known as Wombat Flat. He and a party of searchers found alluvial gold in 1851 on ground now covered by Lake Daylesford initiating the local gold rush. Other finds quickly followed. With the finding of alluvial gold, a town site was surveyed and founded in 1852. Initially called Wombat, it was renamed Daylesford.

In 1859 around 3400 diggers were on the local diggings. The post office opened on 1 February 1858 and a telegraph office was opened in August 1859. Daylesford was declared a municipality in 1859 and a borough in the early 1860s. By the 1860s the alluvial gold was exhausted and a shift to quartz reef mining began. This continued on and off into the 1930s. In later years Daylesford became associated as being a fashionable spa resort, but fell out of favour in the Great Depression.