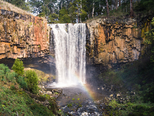 Although pastoral runs were taken up in the area as early as 1838, Trentham was first settled by gold prospectors in the 1850s, and later developed for its timber resources from the surrounding Wombat State Forest. The Post Office opened on 16 July 1862.

A railway line arrived in 1880. At its peak carried up to 21,000 tonnes of freight (mostly timber) annually. The station once had a timber tramway which transported timber to the Goods Platform. In the 1950s, however, the railway declined as better roads were built to connect the town with the major settlements of Victoria, and it was closed during the 1970s. The station is now the Trentham Agricultural and Railway Museum, with the restored station building, the mainly intact yard with some rolling stock, and a platform in good condition.

Potato growing (due to a fertile strip of red volcanic soil), grazing and tourism later became the mainstays of the town’s economy.
HOME     STAY     EXPLORE     EVENTS     FITNESS     ABOUT      CONTACT